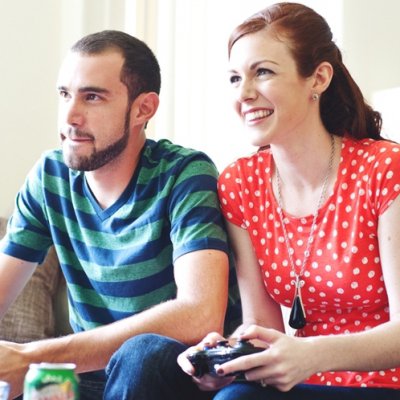 You need something to do in between make-out sessions, and video games are a great solution. They can keep you occupied for hours on end while helping you learn more about your mate. Don't you want to see how well they handle losing or how well they can work with you as a team? If so, here are some of the best video games to play with your partner:

Want to have fun while getting exercise? Just Dance is a great game to play on the Wii and Dance Central is great to play on Xbox Kinect. Both games show you a set of dance moves and ask you to recreate them in your living room. Even if your man isn't a dancer, he'll love having the opportunity to see you shake your booty.

This game could end up in a breakup, because it gets pretty intense. Of course, it's worth the risk, because you'll have a blast racing around the different tracks as your favorite Mario characters. Just don't be too mad if you lose, because you can always challenge your man to a rematch.

The Sims isn't really a two-player game, but you can turn it into one. You can create a character and your boyfriend can create a character, and then you can take turns telling them what to do. It's a great way to get to know each other better, because you get to see what kind of furniture they want in the house and how many kids they want to raise.

There are games on telltalegames.com like The Walking Dead and The Wolf Among Us that you can download right to your computer. They're meant to be one-player, but since they're story based games, you two can choose what to do together. Pretty much all you have to do is choose what dialogue to say and walk around a bit, so you don't need to be a professional gamer to beat this one.

If you both buy Animal Crossing for your 3DSs, you can play video games with each other from miles away. All you have to do is swap codes, and your character can visit the town that your boyfriend's character lives in. You can even chat with him over the game. It'll keep you two close!

There's nothing like a good game of Kirby. If you haven't played one of his games in years, or ever, then you should buy this one. It'll keep you two occupied for hours, and it shouldn't frustrate you too much. The game is pretty reasonable, so you shouldn't get stuck on any of the levels for too long.

If you have the WiiU, this is a fun game to play. In it, you play the role of Donkey Kong while your boyfriend plays as one of Donkey Kong's friends. You'll have to work as a team, so make sure that you're ready to cooperate.

Video games are a great way to bond with your man. They'll show you just how well you two can work together as a team. What games do you usually play with your boyfriend?