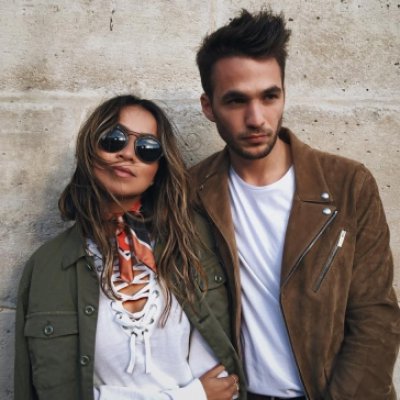 We've all been there. You're on your third-fourth-fifth coffee ☕ run. As you're waiting in line, you notice the *really* cute guy 👨 standing next you. Suddenly, he looks up and your eyes 👀 meet. Whether it's love at first sight or a missed connection on the train, we've all felt that magnetic pull toward someone. You can't put your finger 👇 on it but there's something about him that makes you want to get to know him.

Sometimes, the attraction seems unexplainable. Why are we drawn to certain people 👥 over others, especially when they may be the complete opposite of our type? What we don't realize is that being attracted to someone is about more than just the physical.

1. The Bigger Your Limbal Ring ⭕ is, the More Attractive You Are

Are you a sucker for eye contact? The reason why you swoon over your guy's baby blues may have to do with the size of his limbal ring, which is the dark ring around your iris. According to Psychology Today, most people are drawn to people with a thicker limbal ring because it signifies vitality.

2. Your Type is Determined by Your Parents' Age

If you have older parents, you're more likely to be attracted to older men. The same is true for people who have younger parents.

There is a chemical in testosterone that slightly increases a woman's hormone levels. Known as androstadienone, it's usually released when men sweat 💪. The Journal of Neuroscience likens this to a sort of chemosignal that his body gives off.

The way you carry yourself can reveal a lot about who you are and what you're looking for. If you're like me and you believe in love 💑 at first sight, you understand how that initial physical connection with a stranger can draw you in.

5. How Attracted He is to You Depends on How Hungry 🍞🍕 He is

No, really. In weird news, recent studies have shown that guys find curvy women even sexier when they're stressed 😨 or hungry 🍽.

6. If You Put the Moves 🙆 on Him First, That Means You Aren't Picky

Being able to approach someone you like, especially if he's a total stranger, takes a lot of confidence and courage. If you're a flirting 😏 pro who loves making the first move, this shows that you are open to meeting people outside of what you usually go for.

7. Releasing Your Inner Siren 🚨 with a Red Wardrobe 👗 Will Guarantee You a Date

I've always said that when it comes to beauty and style, red is the most powerful color. Because it's bright, bold and automatically catches the naked eye, wearing red is more likely to score you a date.

8. Being on the Pill 💊 May Alter Your Preferences

We all know that the chemicals in your oral contraceptive can have a little to significant effect on your hormones. In even crazier news, there's a slight chance that they may influence your dating life 👫💓 - You may go out on a date with someone that you wouldn't normally be into.

You know that one scent that you feel super confident? It turns out that he's totally into it! It's natural for us to be attracted to our partners based on their scent; in nature, having similar MHC (major histocompatibility complex) molecules increases compatibility and influences mate choice.

You may not notice it if you aren't really looking for it but your voice 🎤 tends to get higher when you're flirting. Fun fact: It also gets higher when you are ovulating.

11. Garlic Equals Bad 👎 for Your Breath but Good 👍 for Your Love Life

This is possibly the biggest oxymoron. Garlic is full of antioxidants and also increases your metabolism, which makes your body odor more pleasant. It also doesn't hurt that it actually destroys underarm B.O. from the inside out 🙌👏🙆.