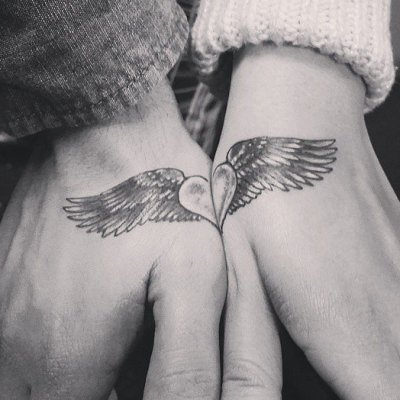 When Mike pulled up his sleeve, when he revealed the design he'd been hiding from me for months, my vision went fuzzy. I was actually thankful for the disturbance. I didn't want to look at it. Not when it was on him.

This wasn't how it was supposed to happen. I was supposed to find a sexy stranger and get to know him, little by little. I was meant to meet his family and ask him about his dreams and take him skiing with me. I already did all those things with Mike. We already knew everything about each other. What fun would falling in love with him be?

I lunged forward, tumbling off my bed, and grabbed his wrist. He didn't move, even when I used my own sleeve to rub at the design, testing its permanence. It had to be a phony, right? Mike had just rambled on about how some men fake their designs to get laid. But he would never trick me, so...

I guess we were meant to be.

But why? Why were the two of us considered soulmates? Why was he destined to be my husband? Why was the last thing I wanted to happen actually happening? I loved him like a friend, not like a lover.

Instead of asking one of the offensive questions swirling through my head, I just asked, "Why would you hide that from me?"

"It's only been a week. I haven't been hiding it," he said, but he yanked down his sleeve as he said it.

"Well, you didn't show me right away."

I placed my forearm against his to compare the designs. The touch didn't send a jolt of electricity through me. It didn't make my heart flutter or my palms sweat.

That's why I scrutinized every line and curve of the image. After a pregnant pause, I said, "Look at that second leaf. Do you see it? On the olive branch. Yours looks a little bigger than mine. Maybe they aren't the same."

He shook his head, laughing in the way he always did when he was pissed.

I pulled my arm back, biting down on my lip until I left indents in it. I felt like a bitch for upsetting him. He was my best friend. I didn't want to lose him. But I definitely didn't want him as a boyfriend, either.

I doubt he wanted me to be his girlfriend, anyway.

The entire week, I'd been worried that she'd only like me for my design once she found out about it. The idea of her still not liking me after seeing the design never crossed my mind, and yet...

She was still looking at me like her brother. Or maybe an asexual cousin.

I didn't want to force her to fall for me. Didn't want to take advantage of the fact that she believed in the matchmaking process.

That's why I pushed aside my longing to kiss her, to prove that we made a good match, and said, "Some people never get a design at all, you know. And some people have two."

She perked up at the mention of multiple designs, but then she said, "Yeah, but that's only widows. People with dead husbands who get a second chance."

The idea of sacrificing myself, so she could have the opportunity to find someone she actually wanted, flashed through my mind. But I was too smart, or maybe too selfish, to voice the thought.

"Open your laptop back up. We'll do some research," I said instead. "Maybe if I get it removed somehow, we can get you a brand new tattoo."

Or maybe she'd fall in love with me in the meantime.