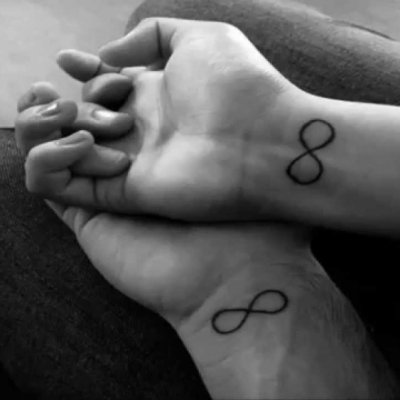 Mandy had known about our matching tattoos for six weeks. That's how long it took us to find a black market tattoo parlor. Now, we were standing inside of it, looking at walls filled with different designs.

"You here to put a fake one on or take a real one off?" a muscular man with a ponytail beard asked. Tattoos covered his exposed arms and shoulders. There was even one crawling up his neck. Ever since The Process began, tattooing become illegal, so he must've worn turtlenecks in public to avoid the cops.

"We're both getting one off," Mandy said. She didn't look bothered by the dinginess of the place. Didn't ask any questions about infections or about getting arrested. She wanted it off that badly.

So I kept my mouth shut.

The tattoo artist sauntered over to her, grabbed her arm to get a closer look at her design, and said, "You understand that as soon as that tattoo comes off, it could take years for another one to pop up. You might never even have another one pop up."

He pulled a cigarette from his pocket and lit it. Then he continued, "And if you believe in all that soulmate stuff, remember that your second design will lead you to your second choice. The design on you now is the one that'll lead you to the person that'll make you way happier than that second person ever will, so... Second thoughts?"

I looked from Mandy's soft, nude colored lips to her freckled cheeks to her dark pupils. No matter where my eyes traveled, all I saw was beauty.

She looked back and said, "I'll go first."

And then she disappeared into the other room.

The (ridiculously hot) tattoo artist was to my left, a chair was to my right, and Mike was in the adjoining room. I probably should've invited him in with me, but my gut was already telling me not to go through with the removal. His puppy dog face would cinch that decision.

"The kid in there has the same design as you," the artist said. It wasn't a question. Just an observation. "He cheat on you or something? That why you want it off?"

"What? No. We're not together or anything."

When he quirked an eyebrow, I noticed there was a little design hidden behind his bangs. "But you know each other?"

"Ah. You don't want to ruin the friendship."

"It's not that." I lifted a shoulder, staring at my forearm design one last time. It was gorgeous. "I just don't feel that way about him. I kind of like bad boys, you know?"

He chuckled, then put out his cigarette on the the arm of the chair. "You don't want a bad boy. You just think you do."

I sat in the chair, trying to avoid touching the ashes littering it. While the artist got his instruments ready, there was a long, thick silence.

I did believe matching designs meant you were soulmates. If any of my friends tried to get their designs removed, I'd call them crazy. Desperate. Undeserving of love.

"You know, getting this tattoo off doesn't mean you can't end up with him," the artist said. He must've noticed how distant I looked. "But you won't be able to take cute wedding pictures with your designs side by side when it happens. I know you chicks are into that romantic stuff."

Okay. That was it.

He let out a little laugh. "It's okay. I'm used to losing money. Can usually spot the people who won't go through with it as soon as they walk through the door."

"That's not what I'm sorry about," I said, and then backed toward the door, preparing to scream. When I got into Mike's view, I raised my arms and said, "This guy is sick. Let's get out of here. I can't."

Mike's body stiffened like a dog in danger. "What happened?" he asked.

I couldn't tell him the truth. Couldn't let him know I backed out, because I was thinking about maybe possibly trying out a relationship with him at some point in the future. That's why I said, "He tried to kiss me. He's being totally inappropriate. It's gross. We need to leave."

I could hear the artist laughing behind me, more amused than upset by my lie. That is, until Mike bolted over, pushed past me, and took a swing at him.

And that was the first time I'd ever thought of my best friend as sexy.