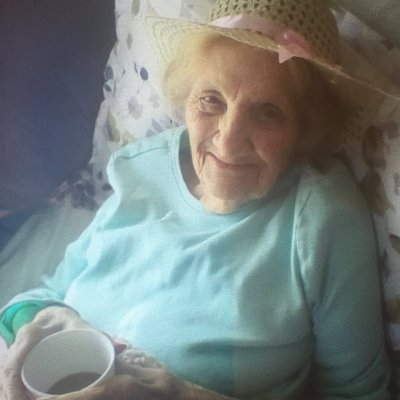 My grandmother loved to dance. But right before she died, her once beautiful, slender legs were stuck in a wheelchair.

No, that wasn't even true. That was a few months before her death. Right before she died, she was too frail to even be lifted into that wheelchair. She couldn't even move, let alone dance.

I found out about her death a few days after Christmas. Instead of hearing the blaring buzz of my alarm, my mother's voice rattled me awake. She didn't have to tell me what had happened. She'd been taking care of my grandmother for a while, so the reason behind my early morning wakeup was pretty obvious.

"I just want you to know..." she said, her voice quivering, and that's all she had to say.

I wiggled out of my covers, leaned up, and pulled her in for a hug. As much as I loved my grandmother, as much as her death would dig beneath my skin and clog my soul, I knew all of it would be ten times harder on my mother.

And it was. The same day my grandmother (or Nanny, as me and my cousins had called her) had died, my mom had run around, from place to place, trying to sort out the funeral arrangements and the flowers and the food.

Turned out that the people who needed the most time to grieve were too busy to grieve.

What was I doing to help? Well, I was stuck creating the collage of pictures they would display during her wake. Her whole lifetime on one oversized bulletin board.

There were photos of her at her old farmhouse. Photos of her on her wedding day, which were taken in the house I currently lived in. And plenty of photos of her making goofy faces at the camera, wearing ridiculous wigs, and of course, dancing.

When I finished with the pictures, I still felt like I hadn't done enough for the woman who had cooked every holiday meal since I was a child and bought me as many birthday gifts as my own parents.

That's why I started to scribble in a notebook. I wasn't the one giving the eulogy, so I wasn't planning on ever saying the words aloud or even showing them to anyone, except maybe my mother.

This is what I wrote:

"There's three things you need to know about Nanny. One is that she accidentally insults everyone she meets. When she met my boyfriend, she called him "cute and chubby," which was harmless, even though he was insulted over basically being called fat.

Two is that I love her food, even though she always ends up getting eggshells in everything she makes. But when I was a child, I didn't care. I once swore I'd never eat a grilled cheese sandwich unless it was cooked by her skilled hands.

Three is that she loves to dance. Not to party music or pop music. To polka. To country music. To the damn Monster Mash (even when it's December).

Now there's three things you need to know about me. One is that I'm beyond happy that the man I want to marry had the chance to meet Nanny.

Two is that I'm never going to eat a grilled cheese sandwich again.

And three is that I'm actually happy that she's up in the sky, because now she's back with her beautiful, slender legs, and she's dancing with her husband."

** I always write fiction, but unfortunately this is a nonfiction one. (I'm going to try to get the third part of The Bachelorette up later in the week, but it might be a little late, because of the circumstances.) **