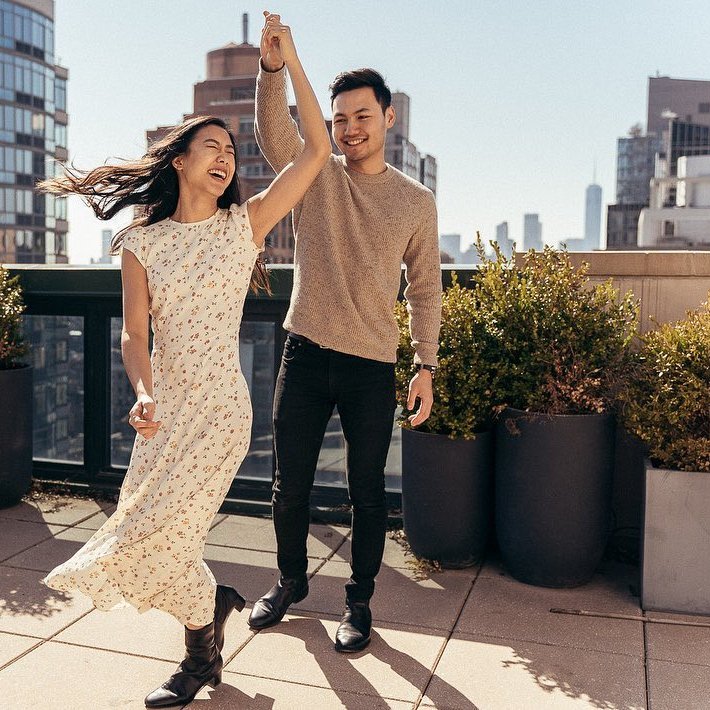 Tyson, the most gorgeous guy to ever acknowledge my existence, had wanted to kiss me. We could've smooched in the middle of his flawless kitchen, which looked like it had been ripped out of a Martha Stewart magazine. We could've forgotten all about the food he had cooked as we lost ourselves in a make out session. We could've been happy.

It would've been the perfect story to tell my friends. The perfect moment to relive when I was old and grey.

But no. I didn't let that happen. I had stopped his lips from crashing into mine and caused that "hurt puppy" look to crawl across his face.

"Sorry," he said after I pushed him away, but I wished he would've kept quiet. That he would've moved past the moment and acted like it had never happened. "I didn't mean to make you uncomfortable."

"I'm always uncomfortable," I said, cradling the bowl of salad in my hands.

Thankfully, he laughed. Then he grabbed a knife to chop apart the chicken he had just finished cooking. "Why don't you go over to the couch," he suggested. "We can watch Once Upon A Time on Netflix while we eat. I know you like Frozen, so I'm guessing you'll like that, too."

I sucked in a breath. My bestie had warned me about Netflix leading to sex. But if I stopped him from kissing me, why would he try to make a more intense move? He wouldn't. But then again, I didn't think he'd go for a kiss on the first date, either.

Was it even a date? Maybe it was just an elaborate booty call. A way to get me comfortable enough to shed my clothes for him.

I tried to push the thoughts from my mind. If I kept thinking about it, I'd drive myself crazy with my ridiculous analyzations, so I just said, "Why don't we eat at the table?"

"Okay, yeah, sure. It'll give us time to talk. Then we can move to the couch."

He looked as confused as I felt. I didn't even know what was coming out of my mouth, anymore. I'd never been on a date. I was freaking myself out. Ruining my own chances at a relationship.

"I just, I thought I came over here to chill. Not to... Netflix and chill."

"Wait." He laughed, but then quickly covered it up. "That's not the intention. I'm not trying to sleep with you. I mean, my parents are in the next room."

"Oh," I said dumbly. Now I looked like even more of an idiot. I was usually pretty confident, so all of these sudden insecurities were baffling. "I'm sorry. I'm stupid."

"Don't insult yourself. I'm not going to tolerate anyone talking badly about my girlfriend."

"Your girlfriend." It was meant to come out as a question, but it came out more like a statement. Like I was tasting the word on my tongue to see if it fit me.

He put down the knife and walked back over to me. This time, I placed the salad bowl on the counter and let his hand graze my arm.

"I know it's only our first date," he said. "But that's what I was hoping it would lead up to. Maybe it will."

It would've been another perfect opportunity to kiss me, but he ushered me over to the dinner table instead.

Hearing him say exactly how he felt restored my confidence. During dinner, the nail I had dropped into the salad landed up on his plate, but he found it hysterical. Then, when we watched Once Upon a Time, he wrapped an arm around me and let me rest my head on his shoulder, but he didn't try to make any other moves.

By the time we watched four hourlong episodes, the clock read 12:00, so he volunteered to walk me back to my house a few blocks away.

When we reached my stoop, it was time for my movie moment. He knew the idea of kissing had made me uncomfortable earlier, so if I wanted a smooch, I knew I needed to initiate it.

That's why I grabbed a strand of my hair and started twirling it in between my fingers. "You know what it means when a girl plays with her hair, don't you?" I asked.

And then he pressed his lips against mine.

His touches were soft at first, his lips barely grazing mine. But when my hands moved to his shoulders and squeezed, his hands migrated to my waist. I could smell his cologne earlier, but now it felt like his woodsy scent of leaves and branches swallowed me whole. My nose felt as intoxicated as the rest of my body. It was like Tyson had taken control of every nerve ending, of every pore.

He pushed his tongue in between my lips to search for mine. When they met, they swirled together in a perfect rhythm. My entire body, from my legs to my lips, felt electric, like my body was recharging. Like I was really alive.

When he pulled away, eyes wide and smile even wider, he asked, "This is your way of telling me you're my girlfriend now, right?"

"You have me all figured out," I said, and then leaned in for one last kiss.

** That's the end, folks! Hope you enjoyed it! Keep an eye out for my other short story, Searching for a Soulmate, which will be updated later in the week!**