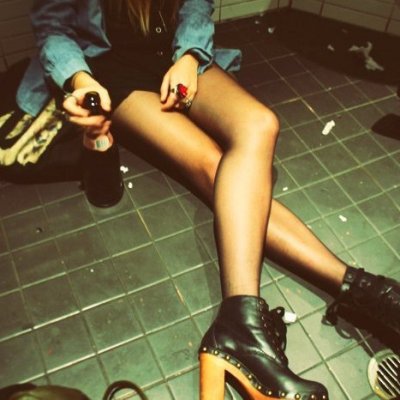 I couldn't believe I was actually standing in Brad Ritter's three-story, lakeside house. He was the most popular (and gorgeous) guy at school, and he had finally invited me to one of his famous parties.

It had taken me three days to decide on what to wear. Now, a glittery gold crop top covered my small chest and a miniskirt fell around my hips. I wasn't one to brag, but I was definitely one of the best dressed there.

Of course, none of that mattered, because everyone around me was sipping on beer.

I'd never drank before. I had no desire to. My father was a recovering alcoholic. When I was little, he'd wasted his paycheck on Jack Daniels and sold my Playstation to pay the bills for the month. That wasn't even the worse of it, but I'd tried to erase the rest from my memory.

Alcoholism ran in the family, which meant I was going to keep my distance from every drug and mixed drink. I didn't want to be like my dad. Not even for a minute.

Once I realized what kind of party it would be, I debated leaving. I should've expected it to end up like this. I'd seen movies where the sober kid got made fun of. I'd heard the popular kids at school brag about drinking. I knew what it took to fit in, but I wasn't going to be stupid enough to give in to the peer pressure.

Right when I was about to head for the door, hoping no one had even seen me enter, Brad sauntered over to me. He held a red cup in one hand, so he used his free one to wrap an arm around me for a quick hug. "Glad you showed up," he said.

The emerald eyes staring back at me made my stomach ripple like waves. That's why I released a nervous giggle, pushed a few strands of hair behind my ear, and said, "Well, my other plans got cancelled, so I figured I'd stop by to make you feel better about yourself."

My smirk gave my words away as a lie, so he laughed and hit me with an intoxicating smile. "Party's not that bad, is it?"

"Well, I just got here. But I'm not really big on alcohol."

He bit down on his lip, his teeth hitting the spot right next to his lip piercing. "Take a sip," he said, offering his cup.

I cleared my throat. "No, it's really okay."

He lifted his shoulders. "No. Not a fan."

"So you're just pretending to be drunk?"

"That's just my personality." He let out a small laugh. "They all know I don't drink. They don't care. Most of these guys are of age. Some of them aren't, but either way, I just make sure they don't drive home afterward."

"Oh. Didn't think you were the mother hen type."

"Not the way I'd describe myself either." He looked me up and down, biting at his lip again. "I'm actually pretty bad at controlling myself. Like right now, I'm worried I'll do something crazy like kiss you."

My lips lifted, but all I said was, "Why don't you start by getting me some Sprite?"

He licked his own lips and nodded, and when he walked away, it was my turn to look him up and down. Of course, I had to push the thrilling thought of hooking up with him to the back of my mind, because I'd drive myself crazy if I fantasized about that possibility.

For now, I wanted to enjoy my night out without having to worry about fitting in.