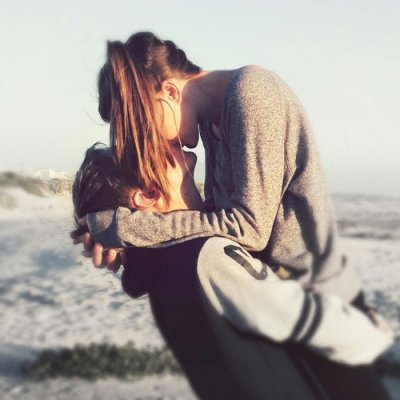 It took us three months to find the people we were searching for. We'd ran off of the beach, straight to Trent's car, and drove until we hit dirt roads.

On our first official day away from civilization, our new family welcomed us in by slamming us to the ground and frisking us for wires and weapons. Once we had an hour-long conversation and convinced them we weren't cops or thieves, they set us up in a wooden hut with a small bed to sleep in and bucket to pee in.

The second day, they showed us around their tiny community, which consisted of sixty "buildings" in total. The third day, they assigned us jobs, with me fishing in a nearby river and Trent chopping wood. Then it was the same day after day, Trent looking sexy with his axe and me tanning by the river.

Until today. Today, after six months of bug bites and the absence of technology and making love so loud our neighbors knew our names by heart, our trial period was over. They finally realized that we weren't some crazy kids temporarily running away from home. Finally trusted us not to leave and spill their secrets. Finally removed my bracelet.

The machine they used, which was the most advanced looking tool in their tiny society, looked like a mixture between a saw and a guillotine.

As soon as the bracelet fell from my skin to the dirt, I twisted my arm to look at my bare wrist. "Sexy, huh?" I said, but when I looked back at Trent, he was fumbling with his jacket.

"Come on, baby," I said nudging his ribs with my elbow. "Don't you wanna see my naked arm?"

I could see his fingers clamp around something, but I couldn't tell what. "I don't know," he said. "I like some jewelry on you. I feel like it's a little too bare now."

My forehead wrinkled, my nose rising. "What the hell? Be happy for me, asshole."

"Hey listen. Calm down." He caressed my cheek with his free hand. "I don't know if this is ironic or sweet or what, but I figured, maybe we should replace one piece of jewelry with another."

He pulled out a woven box. When he popped the lid open, a silver ring with an emerald sat inside.

My jaw fell against my neck, and I slapped him in the arm. "Holy shit! How did you get one of those?"

"Traded one of the locals for it. He got a divorce. She gave the ring back. And she--you know what, don't ask questions. It makes it sound less romantic."

"Hey, I'll return if if you want. Throw it right in the river."

I held my hand out, waiting for him to slip the ring onto my finger.

I nodded. "I mean, I don't think we'll be able to have a big wedding. Won't be able to get a marriage license, either. Maybe we can carve a legal document into some tree bark or something."

"You sure that's what you want?"

"I already had the decision made when we ran away together. The ring just confirms it."

It was the truth. I didn't give a damn about where we lived. The people back in the city might've had phones with service and doctors to prescribe them medicine and actual money, but they married the wrong people. The people who would make their lives the easiest.

But I'd marry the person that would make my life the happiest. The person who gave me the biggest smiles and the strongest orgasms. The person I loved.