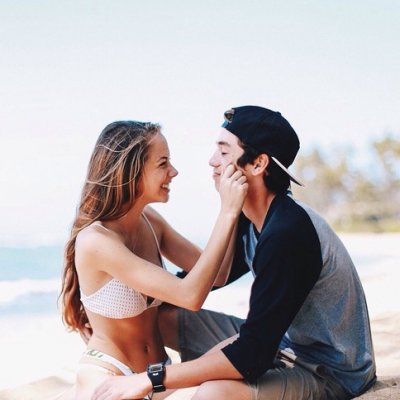 There has to be trust in a relationship for it to work. But what if you have some nagging doubts? What do you do if your boyfriend isn't the most reliable person? We also have to take responsibility for ourselves, and look after our own welfare. Here's some tips to help you know whether your trust is misplaced …

Do all girls love bad boys? Not the sensible ones. Players don't usually reform, and a guy who loves to flirt and have female attention is bound to upset his girlfriend. Players aren't always smart enough to be discreet, so if he flirts in front of you you're going to get hurt sooner or later - and probably sooner.

2. He Dismisses Your Feelings

Does he dismiss your feelings as you being silly and worrying about nothing? Or does he tell you you're being stupid? This man is going to hurt your feelings big time. Someone who cares for you will be sensitive to your feelings and listen to your concerns - he won't dismiss them.

3. He's Let You down before

Think back - has he let you down many times? Does he cancel arrangements or change plans? Is he always making promises that he never keeps? This is a sign that you're going to end up hurt; it's a pattern of behavior that will repeat itself over and over again. An unreliable man is really not worth your time - and he's certainly not letting yourself be hurt.

Some people never learn from their mistakes. They're just not smart enough or willing to learn. If he's constantly getting himself in a mess, and refuses to change, you can't rescue him. And you'll be the one who suffers. He'll just carry on regardless, without considering how his behavior will affect you.

5. Something's Bothering You, and You Can't Tell What It is

Instinct is a powerful tool, and invariably right. You may love your boyfriend, and he may be a lot of fun to be around. But if your gut tells you that something's not right with the relationship, you should listen to it. You feel that way for a reason. Listen to your feelings, and you'll rarely be wrong. This could save you a lot of heartache.

Does he behave like Peter Pan? Immature guys could cause you a lot of upset. They don't consider how you'll be affected by their behavior, or whether your feelings will be hurt by anything they say. They don't have the capacity to think beyond themselves and what makes them happy.

Well, hello! How much more of a sign do you need that you can't trust him not to hurt you? If he's shown that you're way down on his list of priorities below his friends or family, then you're probably already being hurt by his lack of concern for you. And if it's pretty darn obvious he'd rather be with someone else, it's time you gathered your dignity and strength, and walked away.

Ultimately you have to take responsibility for yourself - someone can only hurt them if you let them. Sometimes you can get them to act more considerately; sometimes you have to walk away. How would you protect yourself from someone who's hurt you?