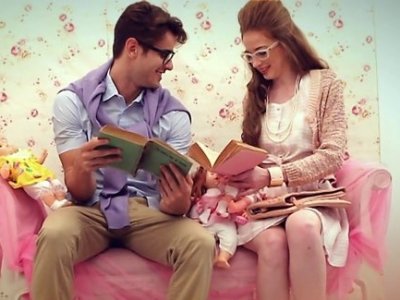 We all know the signs he isn't, but what about the signs that he *is* the guy for you? I use my parents as a model for what I want my marriage to be like. They started out as friends but ended up being married for 28 years and would be married for 28 more had my mom not died. They went through deployments, children, cancer and God knows what else and were able to stay together and happy with each other. If you're in a relationship or thinking of getting into one, here are a few of the signs that he is the guy for you. Some seem obvious; others, not so.

This alone is one of the biggest signs that he is the guy for you. I know this isn't about feelings, but if you have someone who is willing to put your needs above his (and vice versa), that's a very good sign for the future.

2. You're Not Afraid to Be Vulnerable

"When you can find yourself lying helpless in her arms..." It's been a while since I've heard it, but I think this line of a Bryan Adams song says it best. When you're not afraid to let down your guard with someone, when someone makes you feel safe whatever the situation, that's something worth holding onto.

3. You Can See a Future Together

"When you can see your unborn children in her eyes...” Yes, more Bryan Adams lyrics. However, they illustrate my point. If you can see a future together, both abstract and concrete, that's a great sign. It does need to be both, or at least have the potential for both.

4. He Sticks with You through the Hard Times (and Vice Versa)

Again, paging Doctor Obvious. You need to be able to weather the storms if you're going to be together long-term. However, not everyone has the same definition of the term, “storm”. For instance, I once dated a man who hadn't had anything worse than a breakup happen to him. When my mother died our last year in college, he had no idea how to deal with me. I don't fault him for not knowing, but he didn't even want to try. Apparently I wasn't worth it. Someone who loves you, however, will think you're worth it and be there for you, even if he doesn't know how.

This isn't about being a “yes-man” so much as wanting you to see yourself as positively as he does.

6. You Can't Imagine Life without Him

...and not in a "creepy stalker" kind of way. When someone “completes” or even grows alongside you, their presence becomes a major component in your happiness. I'm not saying you'd need *a* man, but you'd need *this* man.

7. He Listens to You

...or at least tries to. This might sound obvious, but you'd be surprised. A man who cares about you will want to know what's going on inside your head.

The passion might be good now, but eventually the honeymoon is going to end. Genuine respect and friendship is what's going to get you through the rough times, not looking good in boxer briefs. If he does look good, that's a bonus. If he looks really good, post pictures. Share the wealth. :)

9. Changes Bring You Closer Together Rather than Farther Apart

When I say changes, I'm not talking about being good or bad so much as how well they match over the long haul. This is why we tell people not to settle down too young -we're still evolving and need to grow up more before we're ready to settle down. Moves, jobs, kids - these things can't help but change us. Your partner may not change in the same ways you do, but couples who stay close through the changes are the ones that last.

Sometimes I get annoyed with my husband when he acts like a kid, but he is usually able to make me laugh. You really need to be able to laugh and share a sense of humor; that alone can take a lot of stress out of your life together.

11. He Does Little Things “Just Because”

This could be help with chores, notes, going out etc. For instance, my husband orders or takes me out when I don't want to cook. I'll put Post-its with love notes in his lunch bag for work. My friend taught his kids to tell his wife how pretty she was. My parents would leave notes like that for each other around the house. The smallest things can make a big difference.

...in ways other than sexual. An old issue of “Cosmo” I read said that men use touch to get sex while women use sex to get touch. I'm not sure how true this is but if he cuddles or holds your hand or whatever just for the sake of doing it, he's a keeper. That's assuming you like being touched; if you don't, he can show affection in other ways. The point is that he does it with no goal other than to be close with you.

Because even if you can't always trust your heart, you can trust your gut.

Like I said before, I had a very good example to follow when it comes to love and relationships. I don't mean that you should rush into things or get serious before you're ready, but knowing what you want and what you should expect from a partner can go a long way in finding the person for you. What about you? Are there any signs I've left out, or that you'd remove? If you're with someone, how did you know they were right for you? What is the most important thing to you when it comes to finding a partner? Discuss!