17 Spots on His Body You Shouldnt Ignore ... 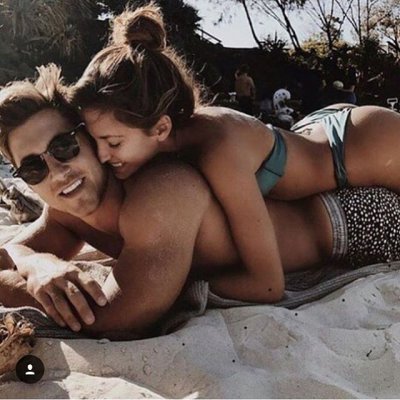 When you're seducing a man, you can't focus all of your attention on one area. After all, there are plenty of different ways to get him hot and heavy. So stop focusing all of your energy on the area between his legs, because you shouldn't ignore these spots on his body:

His ears are actually pretty sensitive. So when you're kissing him, don't be afraid to peck his earlobe or even nibble on it a bit.

We love to have our necks kissed, and men are no different. That's why you should kiss his neck as often as he kisses yours.

This spot is close to his genitals, which is why he'll love when you place kisses there. It'll tease him.

Men don't mind small, tender kisses. That's why you should press your lips against his forehead whenever you want to be sweet.

Here's another sweet, innocent spot for a kiss that shouldn't be ignored. It'll make him see just how much you care about him, because cheek kisses are selfless kisses.

Don't be embarrassed to grab his booty. He does it to you, so you should be able to do it right back to him.

Some men have ticklish stomachs. Of course, if your man can handle being touched there, he'll love a few kisses by his treasure trail.

Don't you love the feel of your man's hair? That's why you shouldn't be afraid to run your hands through it. You can even yank on it a bit if he likes it rough.

Don't forget to look him in the eyes as often as you can. They're the windows into the soul, after all. Making eye contact in between kisses can make every touch feel much more intense.

Some men have foot fetishes. Even if your man isn't one of them, he probably wouldn't mind getting a long foot rub.

Don't forget about placing kisses down his chest. Some men even like to have their nipples played with. Just don't be too rough with them, because it's a sensitive area.

Don't you love the look of your man's collarbone? Then you shouldn't hesitate to pay attention to the sexy spot.

Don't be afraid to flip him over and kiss him on the back. You could even dig your nails into his back a bit while you kiss.

Hold his hand while you're in the middle of making out. If you want to get risqué, then you can lick and suck on his fingers.

Don't be afraid to french kiss. Swirl your tongue around with his.

Don't forget about his legs. They don't seem like a sexy area, but he might love the feel of your nails rubbing up from his ankles to his thighs while you sit on the couch.

Your body isn't the only thing that can turn him on. Your personality can, too. That's why you shouldn't forget to appeal to his brain by showing off your smarts.

Your man has an entire body for you to enjoy, so don't waste all of your time focusing on one area. What's your favorite body part to have kissed?