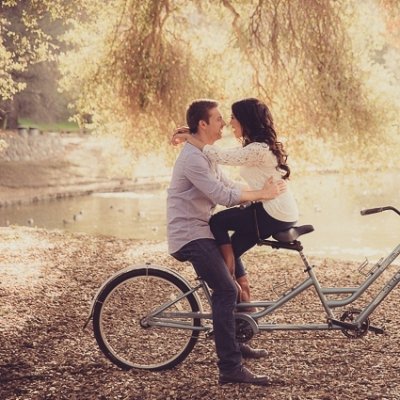 Of course you know he liked the band you just so happened to mention to him. You saw that he liked the page on his Facebook, that he has pictures of their concert (that he went to with some blonde girl you ended up stalking), and that he posted their lyrics on his timeline. One of the most common things you say to your crush is something to keep him from knowing how often you check up on him.

You ask him like it's a question, even though you know the answer. You stare at him whenever you get the chance, so you know exactly what his old style looked like. Even if he only had one tiny strand of hair cut, you'd know the difference.

When he compliments you on your outfit, all you want to do is squeal and flail. Of course, you need to keep your cool if you don't want to ruin your chance with him, so you just smile and brush off the compliment. If you act like it's no big deal, he'll think people always comment on how beautiful you look.

Sure, you liked being single back before you met him, but now all you want to do is be his girlfriend. You're eager to confess your undying love for him, but that wouldn't go so well, so you force yourself to swallow your feelings. You can let him think you're an independent, happy woman without him, instead.

If you're lucky enough to have a conversation with your crush, you want to hear what he's saying. But when you're so very close to him, it's easy to get lost in his baby blue eyes. You could reach out and caress his face if you wanted to--well you do want to, but you know he wouldn't be too pleased about it.

If it takes you an hour to answer his text message, you can claim that you were busy, even though you were really rewriting your reply over and over again. He doesn't need to know that, though. Let him think that you actually have a life.

It's the worst day of your life, because your crush just showed you a picture of his crush. You thought he might've had feelings for you, but he just proved you wrong. Of course, you can't let him know that he just shattered your heart. You have to put on a smile and tell him how gorgeous that girl in the photo is.

When you're crushing on a cutie, it's hard to handle yourself like a sane human being. Have you ever said any of the things listed above to your crush? What else have you fibbed to him about?