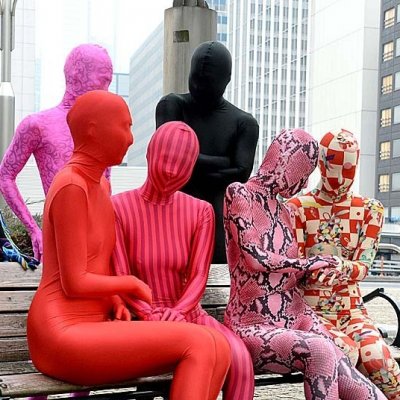 “Some of these questions are ridiculous,” I said, tapping my fingers against the touch screen pad built into the desk. “What do they need to know about my kinks for? And the ‘rate your libido’ one was—God, Hazel, don’t look at my screen.”

My daughter slid her computer chair into mine. I had to grab onto my desk to avoid a domino effect. At least fifty people sat to my right and there were even more to my left. God, the place was packed.

But according to Hazel, weekends were twice as crowded.

“They need to gather as much information as possible about each participant to guarantee the perfect match,” she said, mimicking the famous commercial word for word. She believed every syllable of it, too.

The Zentai Zoo was the place where she had met her mysterious boyfriend and it was where she wanted me to meet my second husband. I figured sixteen years without a father figure was enough for her, so I’d finally given in and let her drag me here. She had followed me to the picture taking station, the measurement station, and finally the computer station, where we’d been for an hour and a half.

After ten more minutes of filling out information on my hobbies and income and favorite sex positions, Hazel led me to the last destination she could tag along to: A locker room with a wall full of brightly colored suits that came in neon pink, baby blue, and jet black.

“This is the fun part,” she said, pulling out the slip of paper we’d been handed at the measurement station. “This says you need to pick one out of row 44.”

Hazel ushered me over to the corresponding number. It reminded me of the first time I’d brought her to her cubby in kindergarten. She didn’t want me to leave then and I didn’t want her to leave now.

She flicked through the suits, sliding several hangers to the side until she landed on a bright blue one. She lifted it off the rack and held it in front of her with an oversized smile. Some of her purple lipstick stuck to her front teeth.

“So this is what Zentia is, huh?” I asked, pulling the suit from the hanger. I slipped off my moccasins and handed them to her. “It looks like those green screen suits actors wear. I’ll feel like a loon.”

“Are you kidding? It should make you feel powerful,” Hazel said as I stripped down to my granny panties. “This suit destroys superficiality. It takes away your beauty, your age, your skin color. It allows two beings to communicate without all of that meaningless stuff.” She raised a shoulder in a lazy shrug. “If you had this sixteen years ago, you wouldn’t have fallen for a deadbeat like dad.”

“But then I wouldn’t have gotten a little diva like you,” I said. I had my legs and my arms in the suit now. All I had to do was pull the cover over my head to block off my face.

“Shut up. Time to cover that big mouth,” she said, waiting for me to do as instructed. Once my entire face was covered, she stepped around me to zip up the back of the suit. “Now get out of here, kid. Get me a new step daddy. Or at least get laid.”

I kissed her on the forehead and shuffled toward the room that she pointed out to me. An electronic scroll above the entrance stated my name, the same way that movie theaters placed the film titles above each door.

When I entered the 12x12 room, a metal table and two folding chairs sat inside. It looked like an interrogation room at a police station. On the commercials, the voiceover said something like, “the lack of romantic atmosphere makes sure that no outside factors contribute to the connection two beings feel.”

A man, or what appeared to be a man with a wide jaw and a bump at his groin, was already sitting on one of the chairs. He got up when he noticed me and extended his hand. I grabbed it, but the glove on glove sensation felt stale compared to skin on skin.

The whole situation was bizarre. Too bizarre. But I’d get through it for Hazel. I would.

“I’m Melody,” I said, surprised at how clear my voice sounded through the fabric.

“Funny. Your voice sounds like a melody.” There was a pause that I smiled during, but for all he knew, I could’ve been rolling my eyes. “I’m Dick.”

He laughed loud enough for me to realize he was doing it. “A sense of humor is my one weakness. That and the scent of vanilla mixed with orange blossom.”

“Are you running some sort of scam?” I asked with a tilted head. “No way you knew the notes in my perfume.”

“When one sense is cut off, the others are amplified.”

“Except you can still see, smell, hear, taste, and touch through this suit.”

He gave a dramatic pause. “I think you’re too smart for me.”

I missed flirty banter. Missed feeling like a woman instead of just a mother. Maybe there was something to this after all…

Three hours went by, an average amount of time for a first date. We’d talked about my daughter, my career as a hairdresser, my love of cheesecake, and my unused gym membership. Hell, when he had asked me about the forms I filled out, I’d even told him about the sex positions and kinks I’d typed in.

When a buzzer went off to signal the end of our time, we both got up, ready to exit out of doors on opposite sides of the room. He reached out his hand for another shake (he wanted to take it slow, which I liked), but I went in for a hug instead. Even that felt like it wasn’t enough, so I decided to go in for a kiss (he let me take the lead myself, which I also liked). Of course, it was a little trickier than usual, considering masks covered both of our faces.

“Keep your eyes closed,” I said, letting my top lashes hug the bottom. “We’ll see how much chemistry our kiss has, and then we can finally look at each other.”

He agreed, so I peeled off my mask, found his shoulders to steady myself on, and leaned in for my first smooch in over a decade.

All I felt was metal.

Assuming I’d hit the wrong spot, I lifted a hand to caress his face. My fingertips searched for his mouth, but I only felt a slick surface. When I skimmed the area his mouth should be, I only felt an indent. When I traveled up to where his nose should be, I felt a bump, but no nostrils. No skin.

Hazel purposely didn't tell me the catch to the Zentai Zoo, because she knew I wouldn't go through with it if I found out.

I hesitated, not wanting to open up my eyes. But when I finally did, the robotic face looked back at me with its emotionless, eyeless face.