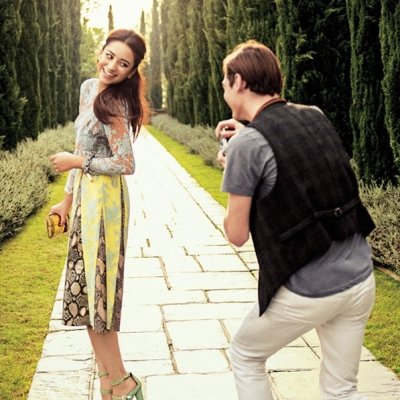 You're bound to get angry at your partner sometimes, but there are specific ways to express anger that won't ruin your relationship. You don't want one little fight to explode into something that causes a break-up. You need to handle the situation delicately, so that you don't end up doing something you regret. Here are some of the healthy ways to express anger when you're fed up with how your partner is behaving:

If he embarrasses you in front of your friends, don't say, "You made me look like a fool." Say, "I felt like a fool." When you use the word "you," it sounds like you're accusing him of something, which will make him go on the defense. If you use "I," then there's a better chance that he'll respect your feelings and be open to talking about them with you. This is one of the best ways to express anger, because it doesn't seem like you're attacking him.

When you're angry, it's easy for words to pop out of your mouth that you'll later regret. Try to calm down a bit before your conversation so you don't say something that will really harm your relationship. Try to avoid cursing, too, because it won't help your argument. It will only make you sound harsh, and make the conversation more difficult to continue.

If he tries to apologize for his actions, don't cut him off while he's speaking. Let him finish whatever he has to say, and then you can respond. If you don't give him a chance to speak, then the issue will never be resolved. Make sure that you respect his words, even if you're furious with him.

Physical violence is never acceptable, whether it's from a male or female. Don't hit him if you're angry, and don't key up his car, either. You have to learn to deal with your emotions in a healthy way. If you really feel the need to hit something, go boxing at the gym to reduce your stress.

If you're mad about one thing in particular, try to stick to talking about that topic. It's all too easy to bring up all of the annoying things he's done in the past in order to hurt his feelings, but it won't solve your problem. Talk about the issue at hand, and don't open up old wounds.

If you're furious at him during a family dinner, you have to wait until you get home to yell at him. Don't make a scene in front of his friends or family. He might deserve to get screamed at, but don't do it while other people are around. If your relationship lasts, they'll always remember you as the couple who fights, and you don't want that.

Don't yell about something just to yell. If you're going to discuss a problem, then you should try to come up with a solution. If you want your relationship to last, you have to be willing to do whatever you can to make things work.

There's nothing wrong with having a few fights with your partner. It would be odd if things were always peaceful between the two of you. Just make sure that you handle your fights in a healthy way so that your relationship doesn't crumble. Do you and your partner fight often?