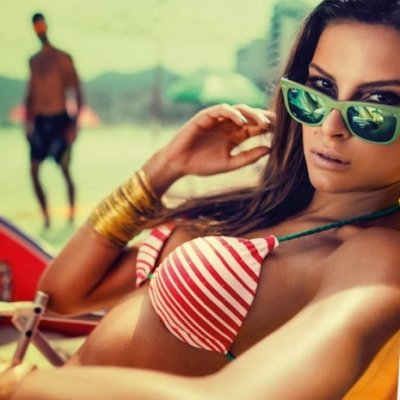 1. Show Your Playful Side

Even though it's hot, you don't have to sit around. Use your energy to play a game of catch or throw around a Frisbee. Men love competition, so they might ask to join in on the game. It's one of the easiest ways to get a guy's attention on the beach, so make sure you always pack a toy in your beach bag.

Flirting on the beach isn't any different from flirting at school, or at the store, or at a concert. Although it's tempting to stare at a guy's abs, make sure you look into his eyes. It'll show him that you're interested, and help give him the confidence to walk over to you. Don't forget to show him that sexy smile!

3. Appeal to His Taste

What's more exciting than finding someone with the same taste in music? Bring a stereo along with you to play some of your best tunes. If your dream man walks past, he'll hear his favorite band playing, and start talking to you.

If you're at a beach with a food stand or bar, head over there to mingle. There's bound to be a bunch of other beach goers around to chat with. It'll be easy to start up a conversation, because you can ask them what drink or snack they think is the best. If that doesn't work, you can simply compliment them on their bathing suit or new tan.

5. Ask for His Assistance

If you're lucky, someone will stroll over to you while you're tanning to get your number. However, you can be in control of what guy you talk to by asking one to help you apply your sunscreen. If he turns you down, ask someone else. There are plenty of options, so don't give up after one rejection.

Instead of sitting side by side with the hotties, you can strut your stuff in front of them by entering the ocean. They'll get a better view of you from their seats in the sand. Plus, there will be other good looking guys in the ocean with you. When you're out there together, it'll be tempting to start a conversation, so why not do so?

Men always say that their heart can be won through their stomach. If you have a cooler full of food or drinks, ask a nearby cutie if he wants a bite. He won't turn the offer down, and it'll get you two talking.

The beach is a fun place to meet new people, because everyone's there to have a great time. If men don't approach you, remember that you can always approach them. Trust me, they won't mind! What's your favorite thing about the beach?