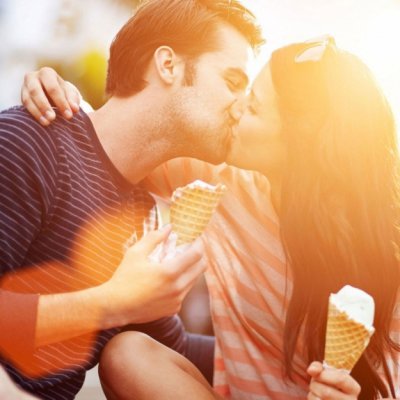 It's never fun to see your ex with a new girl. Even if you're happy without him, it's upsetting to know that he's doing the things you used to do together with her. However, you can't let it bother you too much. Here are a few ways to handle watching your ex move on:

For some reason, we like to cause ourselves pain, which is incredibly unhealthy. So even though you have the urge to look through his Facebook photos to see all of his new pictures with his girlfriend, resist clicking on his page. What good will seeing him kiss her do? It'll only make you more upset, so avoid stalking him.

If you're ex did something unforgivable, like cheat on you, then it's okay to let the world know about his wrongdoings. However, if things just didn't work out between the two of you, don't publicly bash him. It'll make you look worse than it makes him look, because you'll seem desperate and lonely. While you should feel free to complain about him to your close friends, don't make statuses about it and spread rumors about him at school or work.

Some couples can break up and remain friends, but if it's too painful for you to deal with, there's nothing immature about telling him that you can't associate with him for any longer. If you can't imagine letting him leave your life for good, then just put your contact on hold for a few months, until you're over him. If you keep talking to him while you're wishing you were together, it'll only hurt you. Plus, it'll make his new girlfriend uncomfortable.

4. Don't Compare Yourself to Her

Even if he left you for this other girl, don't compare yourself to her. The fact that he chose her doesn't mean that she's prettier or that her personality is better. It just means that they click better. Once you find the right guy for you, you'll realize that some people just work better together than others do.

When you like someone, crazy scenarios will pop into your head. However, it's time for them to stop once he has a new girlfriend. Even though there's a tiny chance that he might be dating her to get you jealous or is just lying about dating completely, it's probably not the case. Even if it is, you don't want to be with a liar, so let him go.

7. Don't Hesitate to Move on

The best thing you can do once you see your ex move on is to move on yourself. You don't have to jump into a new relationship with the first guy you see. You should just start flirting again, having fun with your friends, and living a life that you truly enjoy. There's no reason to mope around when there's so many fun things to do!

As painful as losing him feels right now, you'll heal from the pain eventually. It just takes time. Are you having trouble watching an ex move on?