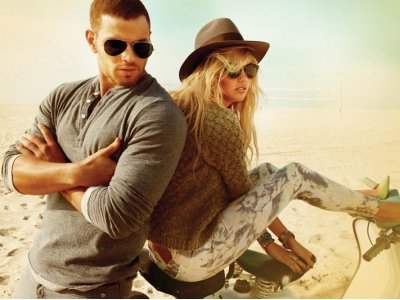 1. Pay Attention to Him

After talking to a some guy friends, I was surprised to find out one of the reasons they tune out is because they're ignored. It's easy to get caught up talking about your day and forget to ask about his. One of the easiest ways to make your guy listen is by listening to him. You'll make him feel important and he'll be inclined to return the favor by listening to what you say. I was amazed at how sensitive guys are and listening was as important to him as it was to me.

I'm incredibly random and skip from topic to topic. If you want your guy to listen to something, stay on the topic. I found that the more I changed subjects while making a point, the more I got the blank stare. Now, I make a point of staying on the topic and being as concise as possible. The result is a guy who can actually repeat what I said, even hours or days later.

I'm not saying you can only talk to your guy at certain times, but there is a right and wrong time for conversation. Think about how difficult it is for you to pay attention after a hard day at work. If you hit your guy with conversation the moment he walks through the door, he may not hear much of what you say. Wait until he's had a moment to relax and change focus from work to home. Also, it's not even worth it to try to interrupt him when he's engrossed in a TV show, movie or a favorite activity. Choosing the right time means he'll be tuned in to you.

Start nagging a guy and he'll either go on the defensive or tune out completely. I don't like it when people do it to me, so I know my guy's not going to either. Be respectful, yet authoritative when asking your guy to do something or reminding him about a chore. If he puts you off, explain why it's important. Treating him like an adult instead of a child magically makes his ears start working again.

I believe in the opposites attract theory. The problem is my interests don't always mesh with his. Even if it's something you're not interested in, listen to him prattle on about the latest sports game or action flick. When it's your turn to talk about fashion trends, he'll be more likely to listen. Sharing interests ensures the conversation is always a two-way street. If he doesn't want to listen, remind him about all the things you listened to and he'll quickly change his tune.

6. Give Him a Signal

Sometimes a guy is so busy with something else that he truly doesn't realize you're talking. I didn't really understand this until I thought about how I tune out distractions when I'm writing. When I need to tell him something important and I want to make sure he listens, I give him a signal. I'll tap him on the arm, lay a hand on his leg or look him straight in the eyes. He knows I want his attention he's happy to comply.

Get rid of all the distractions and ask your guy why he doesn't listen to you. Some guys don't realize how often they tune their partner out. The problem could be something stressful in his life instead of just him. After a particularly frustrating time, I talked to my guy about how I felt ignored. Turns out, he was stressed about something at work. Being open with your guy helps you both understand each other better so both parties become better listeners.

I had a friend that always complained that her guy never listened. To be honest, I struggled to hear her most of the time. She was very soft spoken and her guy and friends often seemed to ignore her. We wanted to pay attention, but we simply didn't hear her. If you're a soft spoken kind of girl, speak up a little. Make sure your guy can actually hear you. After all, if he doesn't know you're talking, he isn't going to listen.

While us girls may love hearing a lot of unrelated details, guys aren't that interested. If you don't want him to tune out, keep what you tell him simple and concise. For example, if you want him to do several things, give him a quick, simple list instead of explaining each task in detail and why he needs to do it. Odds are, he'll only hear the first task. Guys hear far more if it's basic without a lot of flair.

Most guys are good listeners if you talk to them correctly. Sometimes I have to remind myself that he's not one of the girls. While he'll occasionally tune out, it doesn't take much to get his attention again. What methods do you use to make sure your guy always pay attention when you speak?