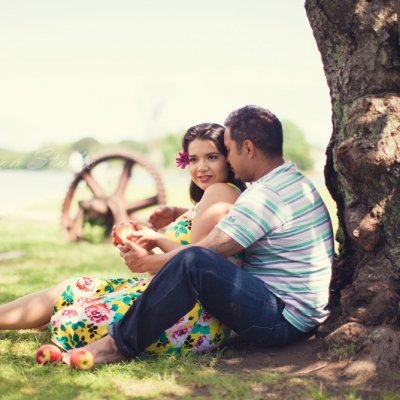 You shouldn't ask your boyfriend to change so that your parents approve of him, but you can give him some helpful pointers. If your parents hate when guys send texts that say, "I'm here," instead of walking to the door to get you, then tell him he should try knocking instead of beeping. One of the best ways to make your parents like your boyfriend more is to figure out little things that he can do that will impress them.

If you have a fight with your boyfriend, try to keep it on the down low. If you're always complaining to your parents about how horrible your boyfriend is, they aren't going to like him. Even if you forgive him for his mistakes, your parents may not, so be careful what you tell them.

If you're happier than you've ever been when you're with him, how could your parents hate him? Show them how much you like him and how much he likes you. Once they see how happy you make each other, they should start to soften up. The most important thing to them should be your happiness.

If your parents have nothing to talk about with your boyfriend, things could get awkward. You're the one who knows both of them, so try to find something that they have in common. If your father and boyfriend both love cars, then start up a conversation about that. Choose anything that you know they'll be able to talk about for hours.

If you've been with your boyfriend for a while, see if he'll agree to helping out around the house. If your parents are installing new floors, see if he can assist. If your yard needs raking, see if he'll help with that, too. It requires quite a bit of work on his part, but if he really wants your parents to like him, he should be willing to do whatever it takes to get their approval.

If your boyfriend gets his college degree, brag about it to your parents. if he volunteers at an animal shelter, bring it up in conversation. Mention all of the good things that he's done, but don't make it obvious that you're trying to talk him up. Try to mention his accomplishments casually.

If you're shaking with nerves the first time your boyfriend meets your parents, they're going to wonder why you're so worried and might assume that there's something wrong with him. Plus, your boyfriend might think that you're embarrassed by him. The calmer you are, the easier it'll be for your boyfriend to be himself and make a good impression.

As awkward as it may be, it's best to get your boyfriend and parents in the same room together as often as you can so they get used to him and see how perfect for you he is. Do your parents like your boyfriend?