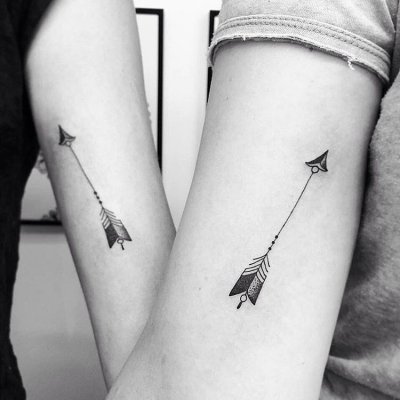 Now, The Process was complete, which meant her design was complete. The tiny black lines, which formed together to create an olive branch, looked identical to the lines on my arm. The arm I'd been covering up with flannel shirts and sweaters for months.

"It's cute, isn't it?" she asked, bending her arm in every which way to get a good look at it.

I knew the damn design would be the only thing on her mind for the next century. That's why I had kept my distance for the week. I had declined her invitations to study together. I had turned off the social media notifications on my phone. I had even left some of her texts unanswered.

She didn't seem to mind. I doubt she even noticed.

Of course, I couldn't keep my distance forever. Love overpowered my willpower. That's why I was standing in her room, trying to ignore the way her mascara (or eyeliner or eye shadow or whatever the hell she put on her face) brought out her naturally gorgeous eyes.

"So... Are you ready for the news?" she asked. She was sitting cross-legged in bed, computer on her lap and blanket draped over her shoulders. She patted her silk sheets, calling me over like a puppy.

I sat on the edge of the bed instead, my feet against the ground in case I felt the need to escape. "Good news, I hope?"

She nodded, her bangs bouncing up and down as her head moved. Then she turned the screen toward me and said, "Look."

The words "Design Dating" were in the browser at the top of the page. The only other thing I could see was slender man, a few years older than us, who had a tilted snapback on his head, a pair of old fashioned headphones dangling from his neck, and an olive branch on his arm.

Mandy was tapping her fingers against her leg, like she always did when she was excited. "I posted a picture of my design as soon as it finished showing up the other day. And. I've. Already. Found. Him." She giggled. She actually giggled. "I was terrified to talk to him at first, but he's actually really sweet. It's insane."

My mouth didn't drop. My eyebrows didn't raise. I just blinked. "You're so gullible, Mandy. Really."

"He's catfishing you. Photoshopped your tattoo onto his picture."

Her red tinted lips opened and closed, just a little, like she couldn't remember how to form a sentence. "You don't know that. If I see him in person--"

"Then he'll draw it on with Sharpie. Or, if he's really desperate to get laid, maybe he'll go to a tattoo parlor and get it done."

She slammed her laptop shut. "Are you going to keep being a jerk?"

"Are you going to keep obsessing over this crap?"

"Actually, yeah, I am. You know why? Because I want to be happy. I want my happily ever after. Call me a little girl for wanting a fairytale ending, but I do. I really do."

A bitter laugh shot from my throat. "Yeah, because right now, your life sucks, right?"

"I never thought it did. But you haven't even been answering my texts this week. Since when do you do that? Are you worried about me deserting you for my future husband, or something? Is that why you're trying to push me away first?"

"Are you a psychologist like your pop now?" My eyes rolled as I rose to my feet. "Those aren't my intentions, anyway."

"Okay, good. Because I'm going to go out with this guy and I'll help you find your girl, so we can get houses in the same neighborhood and grow old together and get together for game nights and--"

I pinched the bridge of my nose. How many times did I have to repeat myself before her brain would actually absorb the info? "It's not him," I said, emphasizing each word.

She made the same sound she used to as a toddler throwing a tantrum. "But how do you knoooow that?"

"But how do you knoooow?"

I pinched my flannel shirt and pulled at the sleeve with so much strength that the buttons on the cuffs just popped open. I rolled the fabric up my forearm, all the way to my elbow, and twisted it toward her, so she could see the design that matched hers.