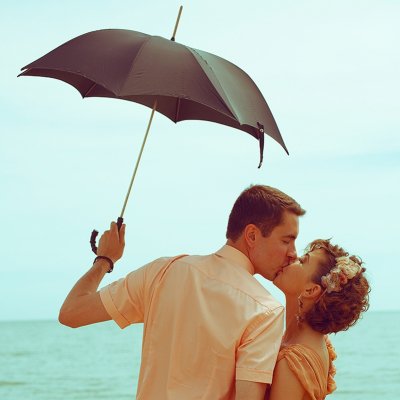 If the guy you're crushing on is super attractive, he's going to have plenty of offers. That means you need to find a way to stand out from all of the other women who are trying to score a date with him. In order to do so, you need to be yourself. Pretending to be the type of girl you think he wants is a bad idea, because there are probably several other girls doing the same thing. The only way you'll stand out if you act differently than they do.

Even though you consider your crush to be perfect, he's still a human being. You need to stop thinking so highly of him, because you don't want to freak yourself out and avoid approaching him altogether. If you're too terrified to talk to him, you're never going to end up dating him.

If you let him know how you feel, but he turns you down, don't give up hope. Instead of lashing out and telling him what he's missing, try to remain friendly. When he sees that you still want to be friends, even though he won't date you, he'll realize you're not only interested in him for his looks. He might even change his mind about you, so never stop being nice.

Don't lie about being a star athlete. Unless you're only looking for a one-night stand with him, he'll eventually find out about your lies. Life isn't like a romantic comedy, so he probably won't find your deception charming. He'll just break up with you and move on to the next girl.

5. Look beyond His Looks

Don't walk around half-naked in order to impress him. Just make sure that you always have your hair washed, your back straight, and your eyebrows on point. Not only will your impressive appearance attract him to you, but it'll help you feel more confident--and we all know that confidence is the key to getting what you want.

Your negative thoughts can ruin your chances with him. If you tell yourself that he'll never like someone like you, you'll never end up with him. You need to start thinking highly of yourself. The more optimistic you are, the harder you'll try to get him, and the better your chances are of success.

Any guy would be lucky to have you, so be brave and ask your crush out. You can do it! Have you ever ended up with a guy you thought was way out of your league?