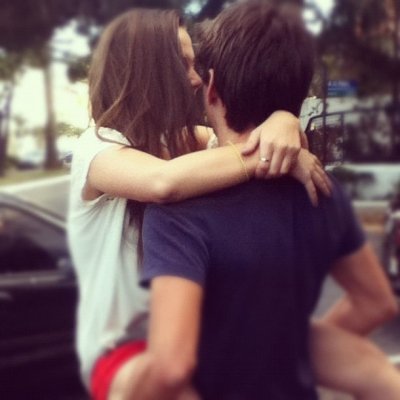 It was, at the risk of sounding like the cliche romantic comedy couples we'd joked around about during our first conversation an hour earlier, the best orgasm of my life.

He didn't climb on top of me and plant tepid kisses on my lips, without even bothering to ask me what position I wanted. No, he started out by ripping off my already ripped jeans and crawling into the space between my legs, letting my thighs cradle his head.

When he ceased with the earth-shattering kisses, was done swiping his soft tongue around, and was finished making me finish, he flopped onto his back. After giving me the chance to calm my heavy breathing and still the delicious trembling, he said, "Want to get on top or should I?"

I didn't even answer him. Just got to my knees, swiveled, and straddled him.

His hands slipped over my arms as I positioned myself over him, and that's when it happened. He hit the hairbands I'd strategically placed over my bracelets and a few of them slipped off, revealing the little red light.

Before he could see it, I grabbed his wrists and pinned them against his headboard, keeping both of our hands out of sight. His eyes were glued to me, anyway, watching my lashes flutter and hips move.

Twenty-five minutes later, we were shoulder to shoulder on the sheets, panting in the aftermath of animalistic, hot-blood sex.

Of course, by that time, I'd forgotten all about the light shining from my bracelet. Wouldn't have cared even if I did.

"What the..." He leaned up a bit, head off the pillow, eyes on my wrist. "Please tell me the sex was so good I went colorblind."

"Huh?" I glanced down at the blinking bracelet. "Oh. Right. I lied about that."

My lips folded down as my shoulders went up. A what-are-you-going-to-do gesture.

"We could get arrested," he said. "It's illegal to knowingly consort with, let alone sleep with, someone your bracelet tells you is a Red. Are you trying to put me in jail or do you want to be in there yourself? I don't know which is more--You're smiling. You're actually smiling right now?"

It was true. I couldn't push my lips down if I tried. "Isn't this fun, though?"

"The sex or this wonderful little conversation we're having?" he asked, nostrils twitching.

"I mean, the sex was amazing. We're doing that again. Trust me, we are. But I'm talking about this. This anger you have. The passion. That only comes out when you really care. This isn't boring. It's real. You can see that, can't you?"

We were still on the bed, only a bra and boxers covering us up, so I reached for his thigh and squeezed. Moved my lips close to his ear. "This is hot. It's fun. It's real."

"You're crazy," he said, but he didn't move when I pressed my lips against the side of his neck, working my way down his collarbone and chest. "You're... Ana... Come on..." Each word got lighter, breathier.

"Done with the yelling already?" I asked, hands in his hair. "I was expecting angry sex, but makeup sex is just as good."

And that was the first night I'd ever spend with the boy I wasn't allowed to love.