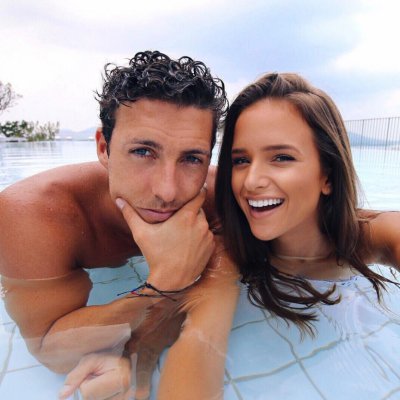 I sauntered down the sidewalk, gold gladiator shoes strapped around my tattooed ankles. A man with a bun looked me up and down, stopping at my cleavage, but the Alert Bracelet on my wrist remained a dull white, like a faraway, cloudy star.

Another man, with his beard rubber-banded together, tossed me a smile and the bracelet switched to green. I picked up the pace.

The accessory, which was mandatory for anyone who identified as a woman, was meant to prevent murders and rapes and--predominantly--unhealthy relationships.

Purple meant physically dangerous (which was rarely seen, because anyone caught with the color would be thrown right in jail). Red meant emotionally dangerous, as in he'd be a bad match for the person wearing the bracelet (me). Green meant emotionally healthy, which meant he'd be a good match for the person wearing the bracelet (again, me). And white meant: Eh, you could leave him or take him.

Of course, those were the technical definitions of the colors. I had a different interpretation.

A man with a fringe and piercings crawling up his ears made eye contact with me, albeit briefly, and the bracelet on my wrist flashed red.

I snapped few hairbands over the bracelet to smother the color, and walked up to him. Smiled. Pushed a piece of hair away in the flirtiest way I knew how.

I'd been with Greens before, and they bored the hell out of me. If they were the type of men I was meant to be with, I had no choice but to fight fate. No way I'd be another boring wife with a boring husband who went to brunch every Sunday and had missionary sex on the rare days the kids were stuck at a sleepover.

But love wasn't peaceful. Love meant screaming and crying and tossing his shit out of the window after a drunken fight and helping him clean it all up the next morning. It meant passion.

That's why I reached my hand out to the man that the bracelet warned me to stay the hell away from and said, "I'm Ana."

"Ana," he repeated, placing a kiss on he back of my hand. "I have a feeling I'll be putting that name in my phone later, so is it with one "N" or two?"

His brows shot up, behind his fringe, but his lips lifted. "Not to sound like I'm a brooding heartthrob in some BS romantic comedy, but girls like you don't usually walk up to guys like me."

I knew what he meant. I was led to boring guys. Boring girls were led to him. They were meant to calm us down. To domesticate us. Put two of us "rebels" together and all hell would break loose.

"Not to sound like I'm a damsel in distress in some BS romantic comedy, but your luck just changed. What's your name, sir?"

"Trent." He pulled out his cell, handing it to me after typing in my name. He literally wrote out "Ana with one N."

I moved my fingers across the touch screen, delivering my digits. When I handed the phone back to him, his pupils flicked toward my wrist. He must've noticed it was dark. That my hairbands were blocking the light.

"It turned greened for me, right?" he asked. I could tell by the strained way he was trying to sound casual that he wanted to hear a "yes," so I wasn't going to give him a "no."

"Yeah, of course," I said, tongue swiping over my red lips. "Why else would I be here?"

I wouldn't know it until later, but it was both the best and the absolute worst lie I could've ever told.