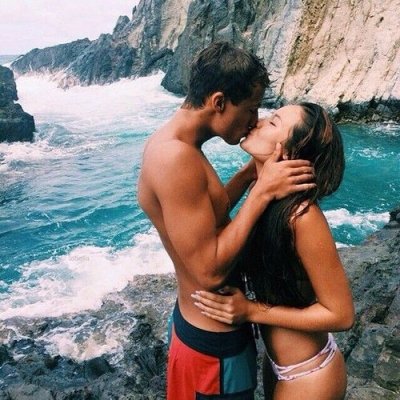 His hands were crawling over me, from my legs to my hips to my chest, but he said, "I don't know if this is really a good idea, babe."

"Oh, come on. A little sand isn't going to hurt you." I was straddling him, my knees against a towel. It was freezing out, with clouds blanketing the sky, so the rest of the beach was deserted. No chance of being caught or--

"Oh shit. Oh shit. Are you kidding?" Trent was glancing over my shoulder, toward the boardwalk. "Get off."

"You're such a liar," I said, but when I swiveled my head, I saw her. A female officer with her hands on her belt. "It's okay. It's okay. I've been caught having public sex before. It's no big deal."

"Have you forgotten about this?" he asked, grabbing my wrist, but I continued to kiss him.

My Alert Bracelet was shining red, the same as it always did when Trent's eyes locked on mine, but it was impossible to see the color. I'd bought a specialized plastic cover from the black market a few months back.

It was sold by people like us who disagreed with the bracelets, who tried to make a home for themselves away from civilization, away from the areas where they could be prosecuted. All I had to do was slip the cover over my bracelet and it would turn the red to green. I never took it off.

The woman came over just as Trent was yanking his bathing suit back up and I was adjusting my top.

"This isn't a nude beach, you know," she said, her voice high and squeaky. Much different than I pictured any cop sounding.

"I'm sorry, officer." I donned a fake smile. "I should've checked the signs. We weren't up to any funny business. Just sunbathing. No one was around and we're used to vacationing in--"

She raised a hand. "No lies. I'm not going to arrest you. I was young and wild once, too, you know." She leaned forward to whisper. "Next time, just don't do it when there's a cop around, huh? Can't let you get away with this twice."

I gave her a smile, a real one this time, thinking she was about to walk away. She ** was ** going to walk away. But then her eyes latched onto my wrist. No one had ever noticed my plastic cover before, but she was a cop. Trained in these things.

"I only have one pair of cuffs," she said, deadpan. "Which one of you wants them?"

I wanted to deny, deny, deny, but if I did, all she had to do was grab my wrist and pull the cover off to see the flashing red light. She already knew she was right. No sense in telling her she was wrong.

"What happened to being young and wild?" I asked, tugging at my hair. "You don't need to arrest us, you said. We're just having some fun."

"Not the kind of fun I can let you get away with."

"Please," I said, wondering why the hell Trent was being so quiet. "We were just messing around. I barely know him. We aren't going to see each other again after today."

Before she could call BS on my lies, she went down, spraying up sand. Trent had taken a swing at her, smashing her directly in the cheek.

"What the hell did you do that for?" I asked, but kicked her walkie talkie away from her, so she couldn't make a call once the pain faded away.

"We have to leave," he said, already moving toward the boardwalk. "It's over, Ana. We break up or we get out, and we both know one's not an option. Not anymore."

"Where are we supposed to go? If there was someplace to go, we would've gone by now."

He blinked, like it was obvious. "Where you bought the bracelet cover."

"The black market people? They're all criminals, living in--who knows--maybe caves or some shit. They're outside of society. You want us to do that? That's what you want our future to be?"

I hated him for being right. For dating me for so long that I'd fallen in love with him. For giving me no other choice.

** I hope you enjoyed it! The next and final part will be up tomorrow! **