The Single Ladies Guide to Going to Prom Stag ... 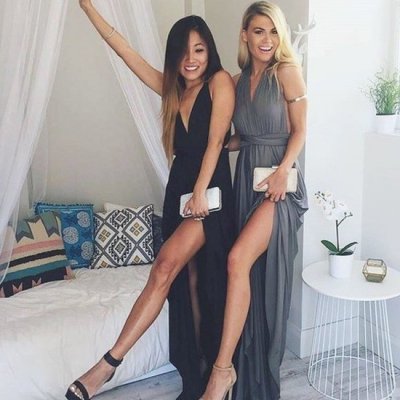 There's nothing wrong with going to prom alone. You shouldn't think about skipping prom, just because you're single. You don't need a date in order to have a great time. In fact, you're probably better off if you go alone. Don't be nervous, because here's the single ladies guide to going to prom stag.

You showed up alone, but that doesn't mean that you have to leave alone. There are bound to be boys that are in the same boat as you. Since they won't have anyone to dance with, you should walk right up to them and start shaking your booty. Just don't steal anyone's date! You don't want to initiate a cat fight. Dancing with the single guys is one of the best things to do when you don't have a prom date.

There will probably be people who will ask you who your date is, but you can't let the question bother you. Come up with a clever response, like, "Well I invited Ed Sheeran, but he hasn't shown up yet." That way, everyone will realize that you're comfortable showing up alone and won't judge you for it. In fact, they'll probably be jealous of your confidence!

3 Go with Other Single Friends

You're not the only person in the school who's going to go to prom without a date. If you have friends that are going solo, then you should all hop in a limo together. That way, no one will feel awkward, because you'll all be in the same situation.

4 Have after Prom Plans

Prom gets more credit than it deserves. It's usually not as great as everyone imagines it will be. That's why you should have plans to hang out with your friends after prom. That way, even if you have the worst time of your life, you can joke around about it all with your friends later in the night. They'll make everything better.

You don't want anyone to make the mistake of thinking that you're embarrassed to be alone. You're proud to be single, which is why you should take pictures of yourself and upload them to social media. Show the world you don't give a crap about going to prom solo. Why would you?

6 Mingle at the Snack Table

If all of your friends got up to dance, and you don't want to sit at the table alone, you should mingle with your classmates at the snack table. There's something about prom that brings out the niceness in others. Even if you've never gotten along with a certain someone before, you might have a fascinating conversation with them that night.

7 Don’t Worry about What Other People Think

You can't waste your time worrying about what other people think of you. Even if you had a date, others would judge you for what you looked like together, how much time you were spending together, and how intense your kisses were. You can't escape criticism. That's why you should forget all about their opinions! The only opinion that matters is your own.

You don't need a man to make prom night special! As long as you're surrounded by people you love, the rest doesn't matter. If you want to go to prom alone, then you should go!

Don't let the thought of going alone scare you, because plenty of people do it. I did! Do you have a date to prom or are you planning on going with all of your friends?