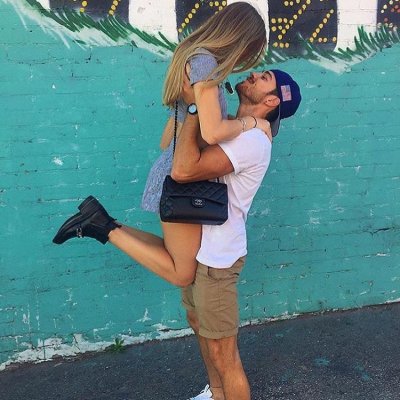 The things men like in women often have nothing to do with looks, bra size or any of the standard things we think men fall for. In fact, although physical appearance is the first thing they notice (don’t we all?), when it comes to settling down, looks often come in last and count the least. Believe it or not, there are at least 15 completely non-physical things men like in women and I’m pretty sure your boyfriend could list many more and confirm that your gorgeous physique, beautiful 👀 and soft 💋 are not the only things that made him fall head over heels for you! Interested to learn more about those? Well, read carefully because every man would ❤️ to be with a woman who is…

Most men appreciate women who are able to just listen – no “ I told you so” lines, no lectures, tips or comments regarding what you would do if you were in his place. You know… just sitting, listening (and I mean REALLY listening)… just showing that you care. Oh, and that involves being patient as well, understanding that most men need to “process” their problems before they can talk about them. Learning to say, “Okay, baby, whenever you want to talk about it – I’m here for you” - is a cute thing to say to your boyfriend. The ability to listen and really hear what's being said is one of the things men 👍 in women because it's so supportive -- and they're much more likely to reciprocate.

Being able to “go with the flow” is one of the traits men 👍 in women the most, and I must admit I’m still not nearly as spontaneous as my fiance would like me to be, although I’m working on it. Most of our men would never sing in front of us (professional singers excluded) but they just love to hear us sing (even if it sounds more like howling), they ❤️ to see us dance around the house, they will gladly throw us a surprise if they know the reaction will be positive and they ❤️ to see us being us (even if it involves a certain dose of silliness).

Although our men often complain about female drivers, most of them would agree driving skills are a must for a modern woman. But, some of them are ready to go even further and admit they ❤️ a woman who can make that engine purr like an overgrown kitten! Shocking? Nah, not really!

Women who actually enjoy the things they do are more attractive, which means you should definitely stop whining about the things you 🚫 have and start enjoying the things you DO! It’s not about being extremely beautiful, having a good job, an impressive resume or whatnot – it’s about you being happy about who you are as a person, it’s about being positive, about knowing that you’re a great woman who deserves great things. And, believe me, it’s true that bad luck never travels alone, but the same can be said for good luck as well.

5. Able to Enjoy Her Food

Eating healthy food and trying to cut down on unnecessary calories is one thing; obsessively counting them is something completely different. While this first thing is actually good for you, the second one won’t really impress him. Being able to go out to a restaurant or a pizza place, to relax, to have a good time and talk about your food in terms of how good it tastes instead of how fat it’s going to make you shows that you’re confident… and we already know confidence is one of the things men (real men) like in women – don’t we?

Our grandmas used to say that the only way to get to a man’s heart is through his stomach – remember that one? Well, we have learned by now that’s not the only way, although it certainly is one of the ways and, if I may add, a very good one. Men love women who can cook and women who would be willing to learn to cook for them. That’s when that traditional part of the brain turns on to note the woman in question would be a good wife. It’s a cliche, I know, but even experts agree on this one!

Although fake girls with their fake this, that and everything turn a lot of heads and probably get a lot of free drinks, most men have agreed they could never choose a girl like that for something more than just a casual romance. Whoa! What a coincidence – we feel the same way about fake guys! Which leads us back to that ideal, fun loving, girl next door all guys love – a girl who likes to smile and doesn’t care what others think of her smile (thin lips, teeth or whatever), a girl who can tell a joke, a girl who doesn’t use “words” like OMG or TTYL, a girl who won’t have a nervous breakdown every time her mascara starts running… a REAL girl!

Every man feels better when he knows his lady is ready to negotiate and work hard to find a solution that will be acceptable for both sides. So, I hope you’re ready to compromise, girls, because although guys like boobs and long legs, they all agree this non-physical quality is far more important. It makes for a much longer, happier, more fulfilling relationship as well.

He really wants to know that you care for him but be careful, because repeating “I love you” until he can’t take it anymore isn’t a good way to let him know how you feel. An average man will tell you that he loves you once and show you how much he loves you five times. You should do the same. Baby him when he’s sick or tired, surprise him every once in a while, listen to his problems – SHOW him everything you want to tell him because this quality is one of the very important things men like in women.

A sense of humor is also one of the things men like in women, especially in women they are planning to settle down with! Time to find your funny bone, ladies! Now, I wonder why is that so… are they planning to make a lot of jokes or do they just want to make sure we’re able to find positive or maybe even funny sides in the future events that aren’t guaranteed to be stress free and easy? I don’t know but a sense of humor definitely gets my vote!

11. Taking Care of Herself

Can you believe this is one of the things guys like in women? I mean, come on, can it be? They actually LIKE when we spend money on all those creams and beauty products? Well, hold onto your chairs now, ladies, because the experts say the answer is “yes.” Taking care of yourself shows him you’ll take good care of him as well, and since they are the ones who enjoy all the benefits of our waxing, beauty treatments and shopping, they might as well admit they like it.

One of the best things men like in women, a quality like no other, a virtue that no woman of today could live without – strength. You don’t have to lose your best damsel in distress act, in fact, you can even let him “save” you once in a while, but he has to know you’ll be there if things start to get ugly. He has to know that there is a strong rock he can grab for under that delicate butterfly facade of yours – a woman he can count on.

13. Natural when It Counts

Just because we like makeup doesn’t mean that we have to wear it all of the time. A guy wants a girl that is going to be natural when it counts -- such as going to the beach! A guy loves it when a girl doesn’t take two hours to look perfect when, in his opinion, she is perfect no matter what. He wants a girl that is so confident in herself, she doesn’t need anything but herself.

Ah, the motherly instinct is a definite must for most guys. He wants someone that will take care of him … and in turn, he will take care of you. Guys also want to know that whomever they choose to have a family with, their kids will be taken care of in the best possible way.