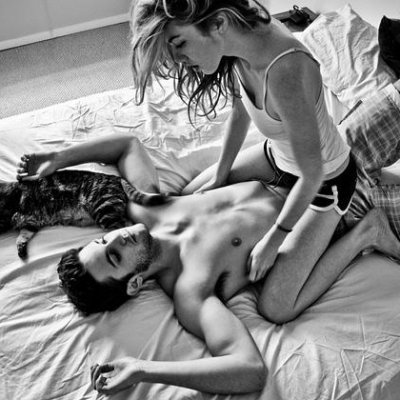 Danny grabbed the hair at the nape of my neck, pulling me away from him. I tried to push my head forward, so I could smash my lips back against his, but he clicked his tongue: Tsk tsk tsk.

Then he dipped his head down and kissed my collarbone. And my chest. And my stomach. And between my legs.

An hour later, when our whole sexual adventure had ceased, I just said, "Not bad, Dan." It was the truth. Most men didn't bother to offer oral. Let alone offer it twice.

The last guy I slept with hadn't even bothered to engage in foreplay. He only kissed me a few times and then tried to go all the way. I had to put my hand on his chest, apply pressure, and actually say, "You're not the only one in this bed. Unless you want to be, you better start acknowledging that I'm here."

It sounded harsh, but I deserved to enjoy the night as much as he did. Guys shouldn't get all the glory. That's something they forget to teach in health class.

"Was I better than the others?" Dan asked, puffing out his chest like he'd just won an award.

"Come on. At least tell me how many guys I beat out."

I blinked. "Are you asking how many men I've slept with?"

"I won't judge. I know it has to be in the double digits."

I narrowed my eyes. "I just told you I don't kiss and tell."

"But why? Everyone knows you're a slut. Might as well talk about it. Don't be embarrassed."

He did it. He said my trigger word. He didn't even say it playfully, like he was trying to joke around. He said it like it was a cold, hard fact that couldn't be argued with.

Without thinking, I raised my hand and smacked him across the face with it. I had rings on my middle finger and index finger, and even a midi ring on my pinkie, so the hit must've hurt.

"I don't sleep with guys with girlfriends," I said, listing the points off on my fingers. "I don't lead guys on. I tell them from the start that I'm only interested in a casual relationship. I get tested regularly. I always use condoms. And I'm on birth control."

His eyebrows disappeared behind his wispy bangs. "So? What are you telling me this for?"

"**So** that doesn't make me a bad person." I finally wiggled off of the bed and grabbed my jeans. "Men don't get criticized for sleeping around, so why should I?"

"Listen. I didn't say anything bad. I told you not to be embarrassed. If I cared about you being a whore, I wouldn't have slept with you."

"I'm not embarrassed. In fact, I'm very open. I just choose not to talk about certain things, and you pressuring me to talk when I don't want to is just as bad as pressuring someone to have sex when they don't want to."

He skipped over the entire point of my rant and just joked, "Have you ever not wanted to have sex? I don't think you know what it's like."

"There are plenty of times when I'm not in the mood. Like right now. And every other time I'm met with misogynistic bullshit."

After I pulled up my jeans and pulled on my shirt, I took my "walk of shame" out of his dorm and back toward mine.

I didn't put up with men like him. Men who shamed virgins or "sluts." Men who refused to treat me as an equal, inside or outside of the bedroom.

I deserved better than that. Every woman did.