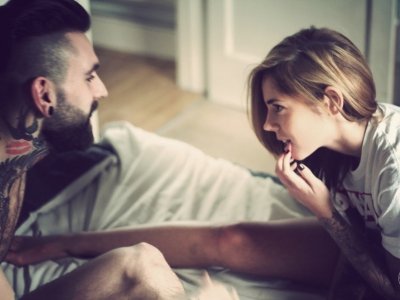 1. He Puts His Hand on Your Back

One of the most obvious tips for decoding his body language is paying attention to the amount of times he tries to touch you. No, this doesn’t mean touching in a sexual way. I’m referring to the little elbow brushes or the amount of times he puts his hand on your back to guide you through a crowd or lead you to your seat at a restaurant. If a guy is talking to you through these gestures, he’s totally into you!

How attractive is it when a guy looks at you with a sexy smirk on his face? It can send chills down your back! Well, the good news is that if he’s doing that sexy half smile while he looks at you and talks with you, he is definitely into you.

3. He Runs His Hands through His Hair

Obviously if a guy really likes you he will do everything he can to look his best when he’s around you. Running his hands through his hair will not only show that he cares about his image but it also means he is anxious and excited to be around you. There is definitely a sense of nervousness he must be feeling too, if he does it more than just once or twice!

4. He Makes Sure to Always Face You

Facing you shows that he’s confident and attentive to you. If he always makes sure to sit down facing towards you or if he seems tense and standing taller than usual when you walk into the room, he is letting you know through his body language that he wants to show you that he’s the man and that he is attracted to you.

5. He Sits with His Legs Apart

Similarly, if he sits with his legs further apart when he is sitting near you, that means that he is letting you know that you are the one he wants to get to know. It’s kind of a guy’s way of marking his territory so that other guys will know not to come over and invade the space between you.

6. He Raises His Eyebrows

Both men and women raise their eyebrows when they are surprised or intrigued – if your crush is raising his eyebrows with you it’s certainly another good sign! It means he finds you interesting and wants to get to know you more. My boyfriend is very animated with facial expressions and when we were getting to know each other, this was a sign I saw very frequently. I never thought much of it at first but I’ve learned that it’s a good thing.

If a guy leans in to you while you’re talking it’s an obvious, clear sign that he’s into you! Leaning in shows that he cares about what you have to say, finds you attractive, wants to know you, doesn’t want other people approaching you while you guys are talking, and that he will most likely want to schedule a second date ASAP! Clearly if he is spending a great deal leaning in and staring at your mouth, he feels a physical connection between the two of you and is hoping for a smooch. Make sure to take things at your own pace and feel confident that you’re already halfway there with him!

Rest assured that these tips for decoding his body language will help you figure out whether to pursue a relationship or not. Guys will be pretty obvious about these signs because if he likes you, he’ll make sure to do anything to get you! Which of these gestures does your crush do around you?