1 Don't Flirt with Other Guys

We've all heard the age old trick, "If you like a guy and he doesn't know you exist, flirt with another guy when you are around him and he will get jealous and go after you." What? No! If you and a friend were both trying to sell your car, and a buyer was looking at your friend's car and asking a lot of questions about it, but ignoring your car, would you think they liked your car better? Of course not! So be honest and up front, and don't make it look like you are interested in another guy.

Ignoring a guy is NOT a way to let a guy know you are interested. It will get you nowhere! Most men don't tend to go after girls who come across as stuck-up, and by ignoring him that's exactly the image you present. Be real, pay attention to him and acknowledge his presence. Guys love to be acknowledged! Acting like he's not there won't get you brownie points, trust me! 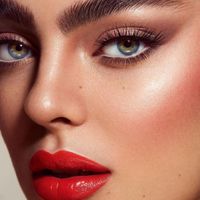 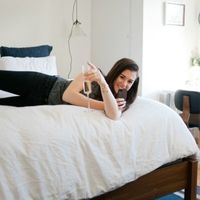 7 Job Hunting Apps to Aid in Your Search ...

3 Look Sexy, but Not Too Sexy

Let the newspaper report the weather. Meanwhile, you can come up with some other interesting topics to discuss. Small talk and chit chat is all fine and dandy, but a way to let a guy know you are interested is not by talking about the rain. Dig a little deeper, find out about him as a person. His likes and dislikes, interests, hobbies and such. Just be careful not to dig into personal areas too soon, you don't want to come across as pushy or nosy!

Light playful teasing or "inside jokes" are great to have. It's nice to have that chemistry with someone! Just be careful that your teasing isn't in any way derogatory or demeaning. Guys hate to be picked on or made to feel like a fool. Making fun of him will make him think that you don't like him, so ease up. Make sure the joke is something you can BOTH laugh at and don't make the joke on him!

You've heard it said before and it still remains true: a smile goes a long way. You can catch more flies with honey than you can with vinegar, so turn that sour expression into a sweet one! Guys appreciate something pretty to look at and what can be more luminous than your sweet smile? Especially after a long hard day at work. What a treat! Make sure your smile is in place all evening, but don't fake it. Make it genuine and heartfelt!

Don't be too hard on the poor guy! He's probably nervous enough, what with all your good looks and everything, so just give him a chance. Men do mess up or say clumsy things when they get nervous but then so do women. Try not to set the standard too high and remind yourself he's only human. Even if your first date is a disaster, give it a second try. You never know! You may find a gem underneath all that roughness!

One of the ways to let a guy know you are interested is by making suggestions for casual activities you can do together. Find something you are both into — Monopoly, XBOX, kayaking — then pick a time and place to hang! It's not necessarily a "date" but it shows him that you are open to spending time with him and that you know how to have a good time and you have some of the same interests. That way he can work up the nerve to ask you on an actual date!

It's a good idea for you to ask him what he does for a living, but don't dwell on it. Most people would rather leave work at work and just focus on having a good time. Besides, talking about work can make him think you are more interested in what he does or how much he makes rather than who he is. So gloss over work talk, then move on to more pleasant topics!

One of my favorite ways to let a guy know you are into him is just by keeping it simple and real. Maybe you are a wine and roses kind of girl, or a ballet-loving, high fashion lady. There's nothing wrong with that! But you should still keep it down to earth. Sit together, talk and be yourself. Connect about real things and he will pick up on the spark if there is one!

Body language is VERY important. It's so easy to tell when someone is interested just by looking at how their bodies are acting! If you want to show him that you're interested, get close to him. Lean in to him when you talk to him and show how relaxed you are when you're next to him. That'll show him how comfortable you are around him and that you're really into him!

Just like girls, guys appreciate a good compliment. Let him know how handsome he looks today! That compliment will stick with him all day and he won't be able to stop smiling every time he thinks about who it came from. Compliments are a very subtle but effective form of flirting and he'll totally get the hint!

An easy way to let him know that you're interested is by befriending the people closest to him. He'll feel nice knowing that you get along with them and he'll see the effort you're putting in. That'll only make him want to ask you out!

When the two of you are together, don't get distracted by your phone. Be there with him in the moment! It'll prove to him that you're more interested in him than posting a selfie to Instagram.

This one's obvious but if you want him to know how you feel, TELL HIM! Most guys love when girls feel comfortable and confident enough to express their feelings. So, tell him that you're interested in seeing where things could go with the two of you.

After reading this article on 15 ways to let a guy know you are interested, you are armed and dangerous now! You have already got the brains, beauty and attitude, and now, you have all the right moves! Just remember to be yourself and everything else will fall into place! How do you let a guy know you like him?

makeup
Best eyeshadow palettes
beauty
8 Man-approved Beauty Products to Share with Your Guy ...
hair
7 Helpful Pointers on Getting Rid of Static Hair ...
fashion
These Hilariously Fashionable Dads Are Taking the Fashion World by Storm
apps
7 Job Hunting Apps to Aid in Your Search ...

Is rice gluton ...
What should i put in my protein shake ...
How to respond to i love you without saying it back ...
What is pineapple good for ...
How to look good pale ...
What is the most delicious food in india ...
Is red meat pork ...
Food show network ...
What are the common symptoms of food poisoning ...
What do you serve at a ladies luncheon? ...